The first diners at the French restaurant Cala didn’t know a robot had cooked their food.

It wasn’t until Cala started offering takeout in addition to delivery that customers saw its robotic kitchen. And, according to co-founder Ylan Richard, diners reacted with a mix of surprise — and relief.

Relief because the robot answered a question that had been lurking in their minds since they first tasted the startup’s food: How could a restaurant sell such high-quality meals at such a low price?

The challenge: Restaurants have notoriously slim profit margins — the cost of running them often consumes up to 97% of their revenue, assuming they even make a profit.

When Richard was in college, he and his Cala co-founders determined that these slim margins were the reason they couldn’t find any restaurants serving quick, affordable meals that were also healthy.

“Through our research, and driven by our own stomachs, we could see that the food service industry is broken,” he said. “In fast food, the low-profit margin means that it’s impossible to use higher-quality ingredients.”

The idea: Restaurant costs are generally divided fairly equally between food, labor, and real estate. The best way to increase the food budget, the Cala team decided, would be by cutting the real estate costs. A compact, fully robotic kitchen would dramatically shrink the amount of space they had to pay for.

After several years of development, the team had a pasta-making robot that takes up just 3 square meters of space — that saves Cala about 60% on its real estate costs, Richard told Sifted, and the company puts those savings toward better ingredients.

The bigger picture: Cala isn’t the first restaurant to automate its kitchen — elsewhere in the world, robot chefs are preparing salads, pizzas, burgers, and more — and the ability to quickly deliver higher-quality food at reasonable prices is just part of the allure.

Restaurant kitchens are dangerous places, with lots of things for workers to cut and burn themselves on, so delegating cooking tasks to robots can potentially lead to fewer workplace injuries.

Robots could automate more than 20% of food prep and cooking jobs.

Food-borne illnesses are another major issue, sickening 48 million Americans every year, according to the CDC. Robots make food prep safer by just being more sanitary than humans — they can’t come to work sick, disinfection could be automated, and there’s no need for hair nets.

As for labor, machines are generally more consistent and reliable, too, pumping out the exact same meal every time it’s ordered, and never calling off work or taking breaks (McDonald’s ice cream machines notwithstanding).

Robotic kitchens might be a novelty now, but restaurant consulting firm Aaron Allen & Associates says that bots could automate more than 20% of food prep and cooking jobs — and the success of restaurants like Cala could determine how quickly they catch on.

The deets: Dishes at Cala start at about $9, and diners can use an onsite touchscreen terminal to order their custom pasta bowl, choosing from more than 10 pastas and 10 sauces, as well as nearly 40 additional toppings.

After Cala’s robot cooks and plates each order, servers deliver the food to customers, who must take it elsewhere to eat — the restaurant has no seating.

Cala was initially only available via delivery apps due to pandemic lockdown restrictions — it wasn’t until those restrictions were lifted that diners could visit the restaurant and see that their meals were being prepared in a robotic kitchen.

Richard believes that worked to the founders’ favor — they were able to prove that it was the quality of their food, and not the novelty of a robot cook, drawing in customers.

Looking ahead: Since launching in October 2020, Cala has served more than 25,000 meals from its robotic kitchen, and it just secured another $6.6 million in funding — enough to open five or six more restaurants in France in the first half of 2022.

Backed VC led the latest funding round, and its founding partner, Andre de Haes, believes Cala has the potential to transform the fast-casual dining experience in Europe.

“Cala is riding major macro trends: a growing demand for healthy affordable food, the changing economics of high street retail, and the increasing acceptance of advanced robotics in daily lives,” de Haes said. “The proof is in the pasta — the first store has remarkable ratings.” 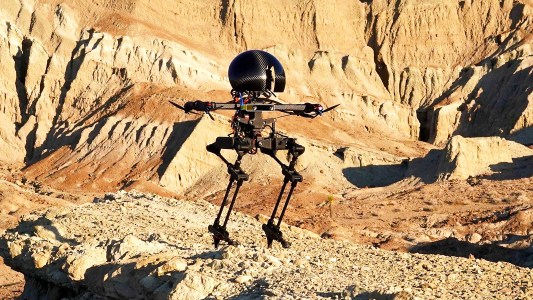 Caltech’s new bipedal walking robot can fly to get around obstacles, and it’s steady enough on its feet to skateboard or slackline.