Caltech researchers have built a bipedal walking robot that can fly to get around obstacles. It’s also steady enough on its feet to skateboard or slackline — skills it shows off in a new demo video.

The challenge: Most mobile robots specialize in either flying or walking, and each type of locomotion has its pros and cons.

Flying robots are better equipped to travel over complex terrain, but they’re also energy intensive and can only carry small payloads. Walking robots require less energy and can carry heavier payloads, but they can have trouble traversing something as basic as a set of stairs.

A hybrid bot: Now, Caltech has built a walking robot that can fly as needed, delivering the best of both worlds in a single machine.

Its name is LEONARDO (LEgs ONboARD drOne) or LEO for short, and in a newly released video, the robot not only walks and flies, but also skateboards, slacklines, and stays upright when shoved (something roboticists seemingly love to do to their creations).

Why it matters: LEO’s ability to walk and fly with incredible balance could make the bot useful for an array of applications.

It could navigate disaster zones during search and rescue operations, flying over obstacles that would block other walking or rolling robots. LEO could also be sent to inspect or repair equipment in high places, keeping human workers out of harm’s way

Eventually, the tech developed for the walking robot could even be incorporated into future space rovers — the machines could save energy by walking when the terrain allows and flying only when they need to overcome obstacles.

How it works: LEO is 2.5 feet tall and walks on two legs. Attached to its shoulders are four propeller thrusters (two on each side) — these allow LEO to fly when necessary, but they also help it stay balanced while walking.

“Because of its propellers, you can poke or prod LEO with a lot of force without actually knocking the robot over,” co-author Elena-Sorina Lupu said in a press release.

The next steps: The researchers are already working to improve their walking robot.

One goal is to revamp its leg design to minimize the bot’s reliance on the propellers for walking. That should make LEO more energy efficient — right now, the robot’s battery dies after just 100 seconds of flight or 3.5 minutes of walking.

Another is to make the robot more autonomous. LEO currently follows a predetermined path and must be told when to walk and when to fly — Caltech wants the robot to choose its own path from one point to another and decide for itself when to use each mode of transportation. 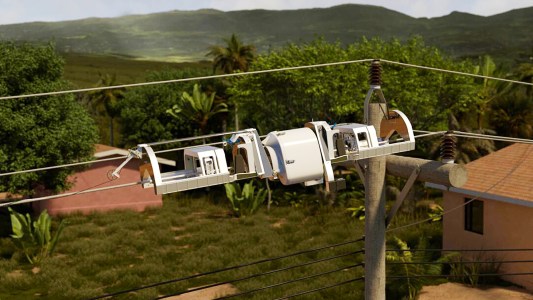 A Facebook robot that wraps fiber-optic cables around power lines could help bridge the digital divide by expanding internet access.