Researchers at Spain’s Institute for Bioengineering of Catalonia and the University of Pennsylvania are pioneering the use of nanobots in medicine, and in a new study, they’ve shown that these tiny robots can kill off bacterial infections.

The self-powered robots could be particularly useful for delivering targeted antibiotics to fight infections without accidentally creating superbugs, as well as working along the full site of the wound and getting drugs exactly where they need to be.

“The machines can actually travel around the wound and clear the infection as they go.”

Rise of the nanobots: Nanobots are a bit on the fantastical side; tiny machines that swim around inside people are a fun plot device for sci-fi scripters and futurists.

They are also quite real.

Researchers are exploring a future for microrobots, and the even-tinier nanobots, in medicine as targeted weapons — including delivering treatments directly to cancer cells, performing tiny and precise surgeries, and scraping the plaque off teeth.

The nanobots in the IBEC and UPenn study, published in ACS Nano, are built from hollow microparticles of silica. To power the nanobots, the teams used urease, an enzyme which devours urea and turns it into energy, ammonia, and CO2, allowing the nanobots to actively move.

That could be a key ability to unleash nanobots in medicine, Levy reported, since conventional drugs like antibiotics and chemotherapies are reliant on their medium for travel. That may work fine when your medicine is hitching a ride to its target in the bloodstream — but what about thicker or stagnant fluids, or biofilms?

“In places where the viscosity is high or the diffusion is very low, that is where you need motion,” Sánchez told Levy. “If you don’t have motion or propulsion, then you’ll never get from point A to B.”

Because of that, the antibiotics typically kill bacteria around where they are introduced, de la Fuente said.

While it sounds like a fabulous B movie, nanobots battling superbugs could soon be a reality.

Nanobots vs superbugs: While it sounds like a fabulous B movie, nanobots battling superbugs could soon be a reality — and one in which the outcome will have a marked bearing on your own life expectancy.

Bacterial infection is the fourth leading cause of hospital deaths in the US, the authors wrote, and still kills millions of people worldwide. While antibiotics worked wonders on turning the tide in our war on disease, a combination of overuse, misuse, and adaptation has led to a horrible new foe: the superbug.

These bacteria have antimicrobial resistance (AMR), which means the medications which normally kill them have lost their effectiveness. Researchers are racing to find new ways to kill these bacteria, from CBD to viruses.

De la Fuente’s lab at UPenn is also searching for new antibiotics in peptides, which are kind of like short pieces of proteins.

Their nanobots were loaded with two peptide warheads: LL-37 and K7-Pol, which Levy notes is pretty awesomely derived from wasp venom.

Healing mice: To test if their fully armed and operational nanobots were capable of killing — and if their ability to move played an important role in healing — the team tested them in mice.

Mice were scratched across their back and then infected with the superbug Acinetobacter baumannii — a very difficult to treat wound, Levy laid out.

While they won’t be hitting pharmacy shelves based solely on this study, the research is a proof-of-concept for antibiotic nanobots in medicine.

“This technology represents a much-needed tool to direct therapeutics to their target to help combat drug-resistant infections,” the researchers wrote. 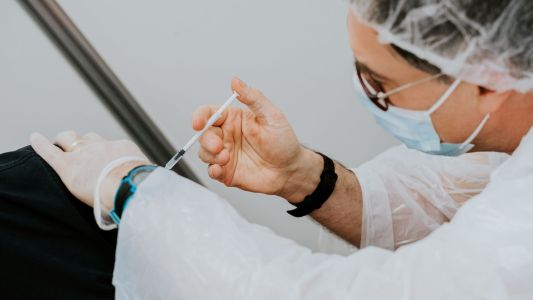 New virus-based vaccines could play an important role in generating a long-lasting, broad immunity against a rapidly mutating virus.