Mental health care company Compass Pathways has just released the results of the largest psilocybin treatment trial to date — and it suggests that the psychedelic drug is effective at alleviating hard-to-treat depression.

However, the safety data suggests the drug may also have opposite, paradoxical effects for a small number of patients.

The challenge: Depression affects about 280 million people worldwide, and many seek relief through psychotherapy or medication.

However, about 30% of patients have treatment-resistant depression, meaning they’ve tried multiple treatments without relief. This can dramatically affect their quality of life and, if their depression is severe enough, even lead to suicide.

“We now have evidence from a large well-designed trial that psilocybin may be effective.”

A psilocybin treatment: Psilocybin — the psychoactive compound in magic mushrooms — may be able to help some of these people.

The drug showed promise as a psychiatric treatment in the 1950s and ‘60s, but research into it ground to a halt in 1970 when psychedelics were effectively made illegal for all purposes by the Controlled Substances Act.

Psychedelic therapy is in the midst of a research revival lately, however, and Compass’ study provides some of the most robust evidence in support of it to date.

“We now have evidence from a large well-designed trial that psilocybin may be effective for people with treatment-resistant major depressive disorder,” David J. Hellerstein, one of the study’s principal investigators, said.

The experiment: Compass’ phase 2B trial involved 233 people with treatment-resistant depression, all of whom had stopped taking any antidepressants prior to starting the trial.

The participants were divided into three groups and given 1 milligram (mg), 10 mg, or 25 mg doses of Compass’ synthetic psilocybin, called COMP360. (The 1-mg group served as the control group, since it is too small to have noticeable effects.)

In addition to the psilocybin treatment, participants in all groups also received support from trained therapists during the course of the trial.

The good news: Participants’ depression levels were measured before and after treatment using the Montgomery-Åsberg depression rating scale (MADRS).

The 25-mg group also saw a statistically significant reduction in their MADRS scores just one day after the psilocybin treatment, according to Compass.

“A high dose of psilocybin works immediately, the day after, for a large number of people, and continues to work,” Compass CEO George Goldsmith told Bloomberg.

One person in the control group experienced serious issues compared to 11 in the treatment groups.

The bad news: Five people in the 25-mg group and six in the 10-mg group reported treatment-emergent serious adverse events (TESAEs) — in other words, serious issues that showed up after treatment. These events included suicidal behavior, intentional self-harm, and suicidal ideation.

While patients with major depression are known to be at risk for these issues, only one person in the 1-mg control group experienced such an event during the study. Compass now wants to figure out what link — if any — there is between its psilocybin treatment and these TESAEs.

“Our plan is to look at [the cases] in as much detail as we can, but in addition, in the secondary analyses, to look at the Columbia suicide scales that were collected on every patient at every visit,” Compass CMO Guy Goodwin told Fierce Biotech.

“That will give us, I think, a much more accurate understanding of the relationship between treatment and both suicidal ideation and suicidal action,” he continued.

The big picture: Compass’ results still need to undergo peer-review, but if they hold up, they would be the most robust evidence to date that psilocybin can help many people with treatment-resistant depression.

But further research is needed to understand the potential risk of side effects, and to understand why some patients saw large improvements in depression, while others experienced serious adverse events.

Still, this trial could encourage more research into psychedelics and the brain, and maybe one day, lead to a new kind of depression treatment for the millions in need of one.

If you or someone you know has had thoughts of suicide, call the National Suicide Prevention Lifeline at 1-800-273-TALK (8255).

If you have a comment about this article or if you have a tip for a future Freethink story, please email us at [email protected]. 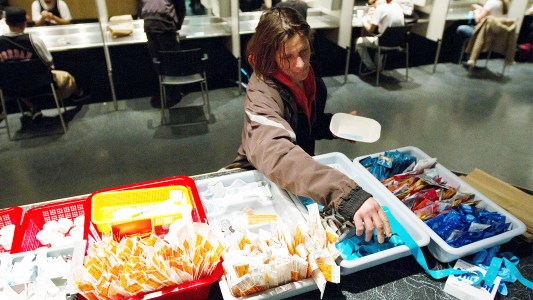 In an important test of drug harm reduction techniques, Rhode Island is set to become the first state to open safe consumption sites.

Drugs
Rhode Island will be the first state to open safe drug consumption sites
By B. David Zarley
Subscribe to Freethink for more great stories
Subscription Center
Sections
Video
Freethink
Subscribe
We focus on solutions: the smartest people, the biggest ideas, and the most ground breaking technology shaping our future.
Subscribe