Any ALS candidate is welcome news, even at such an early stage, but Verge’s compound is unique: it was discovered not through animal or cell testing, but by an AI analyzing millions upon millions of human data points.

The trial is among the first for a drug discovered in such a manner, the company said.

“We are proud to be not just one of the few AI-driven biotech companies to have made it to the clinical stage, but also one of the first to bring forward a novel clinical compound against a novel target, that was entirely discovered and developed internally on our platform,” Verge CEO Alice Zhang said in a statement.

The field’s been a bit hot lately, with everyone from Alphabet to ambitious teenagers entering the fray, searching for a vast array of new drugs. The idea is to leverage the vast amounts of medical data out there via AI to help create a shortcut for finding molecules that can treat disease.

The challenge: Drug discovery is… frustrating, to put it simply. Just finding a potential candidate can be costly and time consuming, and the hit rate is devastatingly low — like stormtroopers-shooting-at-heroes low. Out of every 10,000 candidate drugs identified, perhaps five will make it to trial.

And, of course, those five could fall at any number of hurdles before they are approved — many drugs that look good in animal testing fail in human trials, especially when it comes to complex neurological diseases like Alzheimer’s.

Verge’s compound is unique: it was discovered not through animal or cell testing, but by an AI analyzing millions upon millions of human data points.

The idea behind Verge’s use of AI is that, by starting with human patient data, you will be more likely to hit on compounds with a higher chance of working in people, and you can gain insight into how the condition really works in human beings.

“Hypothesis are usually sourced from academic discoveries or publications and tested in a sequential way, mostly in animals, mice or even cell models to predict which of these drugs would actually work in humans,” Zhang told the Financial Times. “Hundreds of millions of dollars later you are entering clinical trials and, unsurprisingly, the drug fails.”

Human data, computer insights: Verge started by building a database of sample tissues from the brains and spines of people with neurodegenerative diseases, including ALS, Parkinson’s, and Alzheimer’s.

The company’s AI platform, CONVERGE, analyzed a night sky’s worth of millions of data points to come to its conclusions, finding constellations among the chemical stars.

First, it identified a new mechanism that could be behind ALS: loss of function in the cells’ endolysosomal system — a group of organelles within cells.

From there, it identified an enzyme called PIKfyve as a potential drug target to ward off this loss of function. Finally, it suggested a small molecule named VRG50635 (catchy!), which inhibits PIKfyve, as a possible drug candidate. The entire process took four years.

Let the trial begin: The hope is that, by starting from this human data, VRG50635 will be more likely to work.

“Using human data from day one means that we start with higher quality targets that are more likely to succeed in clinic,” Zhang told the Financial Times.

That’s an uphill battle, and especially so when it comes to ALS; at least 50 trials over the past 20 years have resulted in nothing, the pink paper reported.

The trial is a placebo-controlled, randomized, double-blind phase 1 meant to test the basics of the drug — Is it safe? How does it move within the body? What effects does it have, and what’s driving them? — in both healthy patients and patients with ALS.

Riding with CONVERGE’s targets could be an early win for this new drug discovery approach; of course, we still have no idea if the AI’s drug works, and won’t for a while.

“This is just the start of our plan to develop a robust clinical pipeline of new medicines demonstrating that a human-to-human rather than an animal-to-human approach has the potential to transform clinical success rates,” Zhang said in the statement. 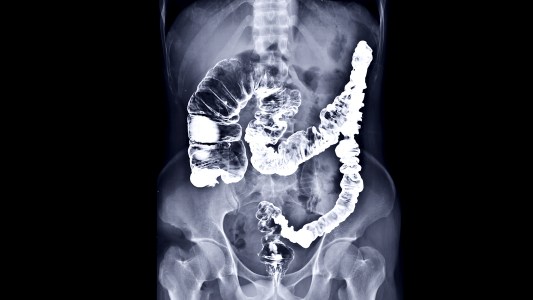 Researchers have discovered that cancer’s epigenome — changes to how genes are expressed that aren’t mutations — may play a key role in its behavior.