In 2021, Carbon Robotics unveiled the third-generation of its Autonomous Weeder, a smart farming robot that identifies weeds and then destroys them with high-power lasers. The company now has taken the technology from that robot and built a pull-behind LaserWeeder— and it kills twice as many weeds.

The weedkiller challenge: Weeds compete with plants for space, sunlight, and soil nutrients. They can also make it easier for insect pests to harm crops, so weed control is a top concern for farmers.

Chemical herbicides can kill the pesky plants, but they can also contaminate water and affect soil health. Weeds can be pulled out by hand, but it’s unpleasant work, and labor shortages are already a huge problem in the agriculture industry.

“It’s harder to find people to do that work every single year,” vegetable farmer Shay Myers told the Seattle Times.

The farming robots: The Autonomous Weeder looks like a large cube on wheels. It kills weeds without harming soil or water and operates autonomously, eliminating the reliance on manual laborers.

As it drives itself down rows of crops, its 12 cameras scan the ground. An onboard computer, powered by AI, identifies weeds, and the robot’s carbon dioxide lasers then zap and kill the plants.

The Autonomous Weeder can eliminate more than 100,000 weeds per hour and weed 15 to 20 acres of crops in one day — for comparison, Myers said a laborer can weed about one acre of his onions per day.

The new LaserWeeder isn’t autonomous — it must be pulled by a row tractor, meaning someone would need to be available to drive it. However, it has three times the lasers of the autonomous farming robot, and in one hour, it can cover two acres and can eliminate 200,000 weeds.

“We’ve proven the effectiveness of our laserweeding technology and the immense benefits it offers farmers, including healthier crops and soil, decreased herbicide use, and reduced chemical and labor costs,” said Paul Mikesell, Carbon Robotics’ CEO and founder.

“To best serve farmers’ needs, we’ve adapted the design of our product, but will still leverage our proven laserweeding technology,” he continued.

Cutting costs: The Autonomous Weeders are now serving as demo units, but the LaserWeeder is commercially available. Carbon Robotics has already sold out of its 2022 units and is now accepting pre-orders for 2023.

While the cost isn’t listed on Carbon Robotics’ website, the company says that growers using the LaserWeeder are finding that it cuts their weeding costs by 80% and pays for itself in two to three years.

“The LaserWeeder automates one of the most demanding, costly, and time-intensive tasks on the farm: weeding,” said Josh Roberts, president and GM of Triangle Farms in Salinas, California.

“The implement design is familiar and easy to integrate into daily operations while streamlining weed maintenance, providing consistency that farmers value and rely on to support the growth of our businesses,” he continued.

This article was originally published on Freethink in April 2021. It was updated in October 2022. 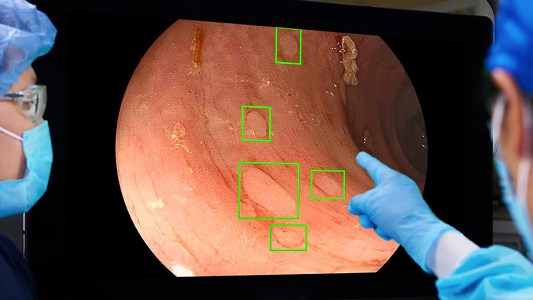 AI
AI is able to spot diseases before symptoms appear
Subscribe to Freethink for more great stories
Subscription Center
Sections
Video
Freethink
Subscribe
We focus on solutions: the smartest people, the biggest ideas, and the most ground breaking technology shaping our future.
Subscribe