No one likes to use bug spray. It smells bad, can cause respiratory troubles if you inhale it, and can damage your clothing. But getting mosquito bites can be even worse because the annoying insects also transmit diseases.

You probably know you’re better off covering up your skin, but mosquitoes can bite through lots of clothing. Now, there is another option. Researchers at North Carolina State University in Raleigh have created insecticide-free, mosquito-resistant clothing and tested it with actual bugs to confirm that it is bite-proof.

They asked a volunteer to don their textiles and get into a cage with 200 live, disease-free mosquitoes.

The problem: Mosquitoes are more than just annoying pests. They carry serious diseases like malaria, Zika and dengue fever. Each year, diseases spread by mosquito bites kill more than one million people, and 700 million people contract mosquito-borne illnesses. But controlling the mosquito population is challenging, and protecting yourself may require spraying lawns, clothing, or even skin with chemicals.

Researchers are trying to find new ways to reduce the number of deadly mosquito bites — from genetically modified mosquitoes that can’t reproduce or carry the infection. to experimental malaria vaccines.

How it works: Not all clothing is bug-resistant Those pesky mosquitoes can bite right through cotton, fleece, even a thick flannel. So the team at N.C. State decided to take a close look at the shape of the insect’s head and mouthparts, and study how the mosquito bites. They considered one of the more dangerous mosquitoes — Aedes aegypti, the yellow fever mosquito, which can also spread dengue and Zika, among other diseases.

After studying the head, antenna, mouth, and mechanics of how it bites, the team created a computer model for designing textiles that could prevent Aedes aegypti bites, based on thickness and pore size.

The bold test: The team created several versions of their anti-bite material and put them to the test. They made a thin fabric with tiny pores designed to prevent the bug from putting its mouthparts through. A second material had larger pores but were still small enough to prevent the insect from inserting its needle-like mouth. A third fabric had the largest pores but was designed to be thick enough to keep the mosquito from reaching the skin.

They first tested the fabric in the lab. They placed their fabrics over a pool of blood in a cage full of mosquitoes and counted the number of blood-engorged insects which were able to penetrate the fabric.

After 10 minutes trapped with the pests, the volunteer had only seven mosquito bites. But that wasn’t good enough for the researchers. So they modified the shirt and tried again. After the second trial, they found that the clothing had protected the volunteer perfectly. Their results were published in the journal Insects.

“The fabric is proven to work – that’s the great thing we discovered,” Andre West, associate professor of fashion and textile design at N.C. State said in a statement. “To me, that’s revolutionary. We found we can prevent the mosquito from pushing through the fabric, while others were thick enough to prevent it from reaching the skin.”

Next steps: You’ll soon be able to purchase your own protective clothing because Vector Textiles, a N.C. State startup, has licensed the associated patent rights and plans to produce clothes for commercial sale in the U.S. They also plan to market the clothes to the military, which sometimes has to operate in malarial environments.

“The final garments that were produced were 100 percent bite-resistant,” N.C. State entomologist Michael Roe said. “Everyday clothing you wear in the summer is not bite-resistant to mosquitoes. Our work has shown that it doesn’t have to be that way. Clothes that you wear every day can be made bite-resistant. Ultimately, the idea is to have a model that will cover all possible garments that person would ever want – both for the military as well as for private use.”

We’d love to hear from you! If you have a comment about this article or a tip for a future Freethink story, please email us at [email protected]

Climate Crisis
This new idea could reduce steel’s carbon emissions by 90%
By B. David Zarley
Up Next 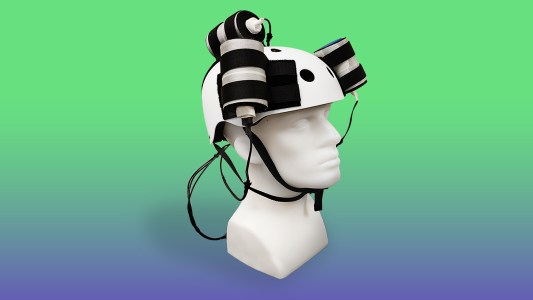 A new brain tumor treatment shrank a man’s aggressive glioblastoma tumor by nearly a third — and all he had to do was wear a helmet at home.