Making a little noise can improve the success of reef restoration projects, according to U.K. researchers, who found that fish were more inclined to settle near new reefs if they sounded like they were already thriving.

The challenge: Coral reefs are hugely important to the ocean ecosystem — despite covering just 1% of the ocean floor, they host about 25% of all marine wildlife. They also create jobs for people, provide us with food, and protect our coasts from erosion and storms.

But due to stressors such as climate change, overfishing, and pollution, coral reefs are dying across the globe — we’ve already lost an estimated 50% of reefs, and unless something changes, they could be gone by the end of the century, according to the UN.

Reef restoration: It is possible to restore dying reefs. We are trying to grow coral in nurseries and then transplant them into the ocean, for example — and using tech such as CRISPR gene-editing, we can even give these coral extra resistance to extreme temperatures, acidic water, and other stressors.

We can also create new reefs by collecting coral fragments and piling them up in one place. For these piles of coral rubble to become active reefs, though, they need to draw in fish and other ocean creatures critical to the ecosystem.

“Without these sounds, there’s a real danger that fishes can no longer hear their way home.”

The idea: Some fish spend the first few weeks of their lives in the open ocean before settling in coral reefs. It’s often the sound of the reef that draws them in, but dying reefs don’t make as much noise.

“The animals that usually make a symphony of crackles, snaps, pops, grunts, and whoops are dead, and in their absence the reef turns ghostly quiet,” researcher Timothy Gordon told EcoWatch. “This is tragic to hear, and also concerning — without these sounds, there’s a real danger that fishes can no longer hear their way home.”

That prompted him and his fellow researcher Stephen Simpson to wonder whether they could use sound to lure fish to reefs and improve the success of a reef restoration project.

To find out, they created dozens of mini rubble reefs off the coast of Australia and then used underwater speakers to play the sounds of a thriving reef community near some of them. Six weeks later, twice as many fish had settled on those reefs as the controls.

“We found that we could actually start to rebuild the reef community,” Simpson​​ told Hakai Magazine.

The big picture: Simpson is now conducting experiments to see whether sounds can help with reef restoration in the Caribbean, but it’ll take a lot more than some acoustic trickery to restore the ocean’s reefs, Gordon told EcoWatch.

“No reef restoration can work without simultaneous dramatic action on carbon emissions to reduce global warming and prevent further damage,” he said. “But if we can limit our emissions to stop ocean warming, new understanding like this gives us a real chance of helping our heavily damaged reefs to recover.” 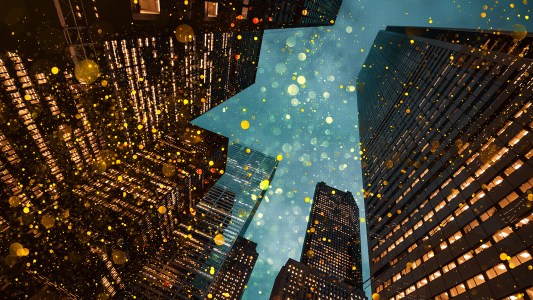 Luminescent materials could be used to cool our cities, and simultaneously cut down on electricity.

Climate Crisis
Luminescent materials could cool our cities and light the streets
Subscribe to Freethink for more great stories
Subscription Center
Challenges
Video
Freethink
Subscribe
We focus on solutions: the smartest people, the biggest ideas, and the most ground breaking technology shaping our future.
Subscribe