Researchers in North Carolina have found evidence that people’s genes may affect how they trip on psychedelic drugs.

The finding may be a potential reason why people sometimes react very differently to psychedelics — the actual potency of the drug is different for different people, even though the dose is the same.

This could have big implications for psychedelic drug trials and treatments.

“Based on our study, we expect that patients with different genetic variations will react differently to psychedelic-assisted treatments,” Brian Roth, the Michael Hooker Distinguished Professor of Pharmacology at UNC School of Medicine, said.

“We think physicians should consider the genetics of a patient’s serotonin receptors to identify which psychedelic compound is likely to be the most effective treatment in future clinical trials.”

Researchers have found evidence that people’s genes may affect how they trip on psychedelic drugs.

Tuning in the reception: Neurons are studded with receptors that allow them to interact with chemicals in the brain. One especially important chemical is serotonin, and many psychedelic drugs work by taking advantage of its receptors.

A serotonin receptor called 5-HT2A is “essential” to how many psychedelic drugs work, the researchers wrote in their study, published in ACS Chemical Neuroscience.

To see if differences in people’s genes could change how drugs work in their brains, researchers looked at the seven most common variants in the 5-HT2A gene.

According to Technology Networks, the team tested how the variants respond to four different drugs: LSD, mescaline (most famously in peyote), psilocybin, and 5-MeO-DMT (most famously found in toad venom).

“Once 5-HT2A is activated by a drug, it has several options on what to do next,” study first author Gavin Schmitz told Technology Networks.

Two of those options are passing the signal through to the cell with different molecules (called G proteins or β-arrestins).

The team used tests that looked at both pathways in human cells to see how balance changed with different combinations of drugs and different genetic variants of 5-HT2A, as well as over time.

They found that different receptor variants led to different potencies for certain drugs — sometimes dramatically so, as in one mescaline/variant combo that found a nearly 10-fold increase in potency.

Most of the variants led to “statistically significant, although modest” changes in efficacy and potency, the authors write in their study.

A clinical consideration: While clinical research into psychedelics as therapies has been promising, positive results are not guaranteed — and we aren’t sure why.

“Clinical studies have found a wide variety of responses to psychedelic drugs, with some patients seeing huge benefits after treatment and some seeing no benefits at all,” Schmitz told Technology Networks.

“Our study suggests that genes matter in determining how sensitive we are to the effects of psychedelics.”

Different expressions of drugs in a dish are not a perfect analogue for how they would respond to psychedelics inside a human brain, of course, but your genes may eventually become an aspect of clinical trial design or even therapies.

“This is another piece of the puzzle we must know when deciding to prescribe any therapeutic with such dramatic effect aside from the therapeutic effect,” Roth said in the statement.

“Further research will help us continue to find the best ways to help individual patients.” 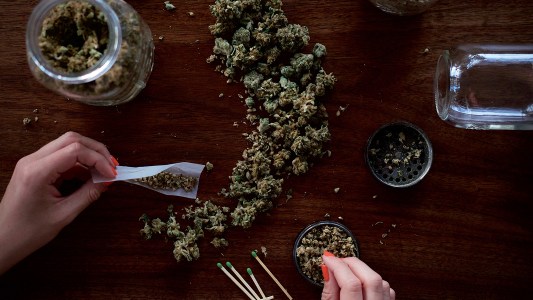 Through the largest analysis of commercial cannabis flower yet, Colorado researchers have found that the current labeling system falls short.

Drugs
What your weed label really means
Subscribe to Freethink for more great stories
Subscription Center
Sections
Video
Freethink
Subscribe
We focus on solutions: the smartest people, the biggest ideas, and the most ground breaking technology shaping our future.
Subscribe