Today’s search engines all function in the same basic manner: You enter a question or keywords and receive a list of links that (hopefully) contain the information you wanted. But what if search engines nixed the links, and instead used artificial intelligence to serve up information directly to you?

That could soon be how Bing works. According to a report from The Information, Microsoft plans to upgrade its Bing search engine with the artificial intelligence that powers ChatGPT, a state-of-the-art chatbot developed by OpenAI.

The update, which could come online by the end of March, might finally give Bing a competitive edge over Google.

Microsoft’s bet: The plan to give Bing an AI boost seems to be long in the making.

In 2019, Microsoft invested $1 billion in OpenAI, the San Francisco-based company that’s working to develop artificial general intelligence (AGI) — a level of AI that’s smart enough to learn and perform intellectual tasks like a human being.

OpenAI is working toward AGI through so-called natural language processing (NLP) models, which can (sort of) “understand” human language and generate human-like text.

The company’s latest language model, ChatGPT, is arguably the most sophisticated and useful chatbot available to the public. Want a step-by-step recipe for risotto? A three-sentence summary of a long video transcript? A 1,000-word essay on Austrian economics written in the voice of William Shakespeare?

ChatGPT can deliver all of these in seconds — often, with few factual errors.

Since late 2021, Microsoft has been using OpenAI’s NLP technology in its Azure cloud computing service, through which vetted customers can access an earlier version of GPT. And in October, Microsoft published a blog post noting that OpenAI’s DALL-E 2, an AI image generator, would soon be available on Bing’s Image Creator.

But what was not public knowledge until recently is that the 2019 agreement with OpenAI allowed Microsoft to incorporate GPT features into Bing. And that’s significant, considering OpenAI has telegraphed plans to charge for access ChatGPT.

As The Information noted, Bing might soon be the only way people can access ChatGPT (or at least parts of it) for free.

A challenge to Google: It’s still unclear exactly how Microsoft will integrate ChatGPT into Bing. (Bing currently uses some features of an older version of GPT to improve search functionality and predictive text.) But it seems safe to say that Google sees ChatGPT as a significant threat — potentially even an existential one.

Today, Google is the world’s top search engine, handling more than 80% of all online searches worldwide and upward of 90% of all mobile queries. Bing is a distant second, processing about 9% of worldwide desktop searches in 2022.

Despite its decades of dominance, Google executives reportedly declared a “code red” shortly after OpenAI released ChatGPT in November, with one executive describing it to The New York Times as a “make or break” moment for the company.

Google has several of its own language models for internal use, including LaMDA, or “Language Model for Dialogue Applications.” (You might remember hearing about it in June 2022 when former Google engineer Blake Lemoine claimed it was sentient.)

While there’s no ghost in Google’s machine, it is very sophisticated, and the company currently uses its language models to better understand what users are looking for in searches, among other functions across its products.

But Google isn’t necessarily racing to overhaul its search engine functionality with NLP. As CNBC reported, Google executives recently told staff at an all-hands meeting that the company faces high “reputational risk” if they implement more NLP into its search engine and it doesn’t work well.

The main concern is factuality. Although language models like LaMDA and ChatGPT are useful and often eerily human-like, they sometimes churn out convincing-sounding nonsense or outright falsehoods. OpenAI CEO Sam Altman said as much in a recent tweet about ChatGPT: “[It is] a mistake to be relying on it for anything important right now.”

But there’s another reason Google might be hesitant about adding more NLP to its search functionality: ad revenue. Google has long generated the majority of its revenue from advertisements, earning money every time someone clicks on a promoted search link or on an AdSense link on a website.

ChatGPT (or a similar AI) could jam up this business model. After all, if an AI could simply tell you the information you’re looking for, there’d be fewer reasons to click links. Your exposure to online ads would shrink as search engines start functioning less like digital directories and more like digital concierges.

That’s one theory, at least. It’s also possible that, like the hotel concierge who earns a kickback for steering tourists toward the overpriced cafe down the block, companies will find new ways to generate ad revenue through AI-powered search engines, such as by promoting a certain vendor when you ask an AI, “Which sofa should I buy?”

ChatGPT itself acknowledged this possibility when I asked it about the possibility of advertisements existing in a GPT-powered search engine:

Ads or not, it’s no sure thing that AI-boosted Bing will be a serious threat to Google. For one thing, Google’s Page Rank algorithm is still incredibly good at generating relevant links, and search is often more about exploring a topic than requesting the kind of specific, concise answers a chatbot gives you.

ChatGPT might be good at generating coherent and often correct answers to prompts, but because of how these models work, it usually can’t tell you the source of the information it generates. (In fact, it’s possible nobody knows exactly where the model picked up any given bit of information, given the huge amounts of online data on which the model was trained.)

But these shortcomings may disappear over time, maybe in part with the release of the next gen GPT-4, which is rumored to be coming out sometime in 2023. As the field moves closer to AGI, Altman noted that the improvements will “make ChatGPT look like a boring toy.”

Robotics
Solving the last mile problem with robotic delivery vehicles
Most of the cost of delivering goods is tied to moving “the last mile” from a hub to the final destination. A new robotic delivery bot being piloted in three cities may help solve the problem.
Up Next 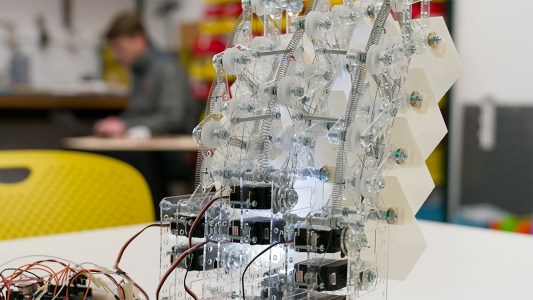 Robotics
“Robot rooms” could be the future of homes and offices
Subscribe to Freethink for more great stories
Subscription Center
Sections
Video
Freethink
Subscribe
We focus on solutions: the smartest people, the biggest ideas, and the most ground breaking technology shaping our future.
Subscribe