Instead of injecting themselves with a medication to prevent bone loss, astronauts on Mars may be able to eat their way to a stronger skeleton, thanks to lettuce that’s been genetically engineered to make a bone-stimulating hormone.

Why it matters: Space is a dangerous place for astronauts — without Earth’s magnetic field to protect them from radiation, their risk of developing cancer is increased, and exposure to microgravity can cause vision problems and decreased muscle mass.

Microgravity can also cause bone loss, and if astronauts lose too much bone mass, they can develop osteoporosis — a disease in which bones are weak, brittle, and susceptible to fractures.

The challenge: Astronauts on the International Space Station (ISS) lose about 1% of their bone mass every month they’re in space despite doing a lot of exercises to minimize bone loss.

Typical ISS missions are only about six months long, but NASA wants to send astronauts on missions to Mars — which would likely be at least three years long — in the near future.

There’s a medication containing part of a bone-stimulating hormone, called human parathyroid hormone (PTH), that Mars astronauts could take to counteract bone loss and stimulate bone formation, but it has to be delivered via daily injections.

That means NASA would need to ship needles, syringes, and significant quantities of the medication itself to Mars with astronauts, increasing mission costs, while the astronauts would need to deal with the hassle of injecting the drug every day.

Salad days: UC Davis researchers have come up with a different way to get PTH to Mars and into astronauts: lettuce.

At a meeting of the American Chemical Society on March 22, scientist Kevin Yates presented research showing how he and his colleagues used bacteria to introduce a gene that produces a version of the hormone in lettuce cells.

On average, every kilogram of their genetically engineered lettuce contained about 10 to 12 milligrams of the modified version of the hormone (called PTC-fc).

“Astronauts can carry transgenic seeds, which are very tiny — you can have a few thousand seeds in a vial about the size of your thumb — and grow them just like regular lettuce,” researcher Somen Nandi said.

Bonus: the lettuce could help cut the cost of transporting food to the Red Planet along with astronauts.

The hurdles: To get as much of the hormone as they’ll need, astronauts would need to eat about eight cups of lettuce per day. As Yates points out, that’s a “pretty big salad,” but he and his colleagues are now looking for lettuce lines that produce more PTC-fc.

“[W]e observed that the average was 10-12 mg/kg, but we think we might be able to increase that further,” researcher Karen McDonald said. “The higher we can boost the expression, the smaller the amount of lettuce that needs to be consumed.”

The researchers also need to test their lettuce in animals and then humans to ensure that it can safely prevent bone loss. They’ll also need to confirm that it grows as well and produces as much hormone in space as it does on Earth — for that, they plan to start with experiments on the ISS.

Even if those work out, though, no one has ever grown anything on Mars, and NASA is still trying to determine the best way to garden on the Red Planet, which has weak sunlight, limited water, strong surface radiation, and other environmental challenges.

The big picture: If the hurdles to growing plants on Mars can be overcome, this hormone-producing lettuce could be just one of many crops pulling double duty on the Red Planet — we could send astronauts into space with seeds that produce other medicines, too.

“I would be very surprised that if, by the time we send astronauts to Mars, plants aren’t being used to produce pharmaceuticals and other beneficial compounds,” Yates said. 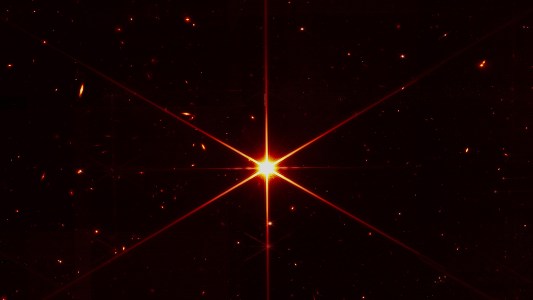 A star image taken by NASA’s James Webb Space Telescope suggests the first-of-its-kind spacecraft is going to work even better than expected.