A Russian anti-satellite weapons test shattered a decommissioned Soviet satellite into more than 1,500 pieces — creating a dangerous cloud of space debris that forced the crew of the International Space Station (ISS) to seek shelter in transport capsules.

The details: On November 15, Russia used a missile to destroy the 2-ton Kosmos 1408 satellite, last used in the 1980s. The satellite broke into 1,500 chunks large enough to track, as well as countless smaller pieces.

Space debris can travel at speeds up to 17,500 miles per hour — nearly 10 times that of a bullet — so even something as small as a screw can cause serious damage to spacecraft, and the Russian test produced a cloud of junk that the ISS passed through every 90 minutes.

Based on NASA’s risk assessment, the seven crew members of the ISS (four Americans, two Russians, and one German) were advised to put on their spacesuits and shelter in the space station’s transport capsules for slightly longer than two hours.

The aftermath: NASA Administrator Bill Nelson said in a statement that the agency will continue to monitor the new space debris to ensure the safety of the ISS crew. He also criticized Russia for conducting the test.

“With its long and storied history in human spaceflight, it is unthinkable that Russia would endanger not only the American and international partner astronauts on the ISS, but also their own cosmonauts,” Nelson said.

The Russian Defense Ministry confirmed the test on November 16, but denied that the space debris it produced was any threat to the ISS.

“The United States knows for certain that the resulting fragments did not represent and will not pose a threat to orbital stations, spacecraft, and space activities in terms of test time and orbit parameters,” it said in a statement.

The bigger problem: While no one has yet attacked a satellite as an act of war, this isn’t the first time a nation has taken out one of its own satellites with a missile.

We rely on satellites for GPS, broadband internet, weather forecasting, and much more, which makes them an alluring target for military strikes, and four nations — the U.S., China, India, and Russia — have all demonstrated anti-satellite weapons on their own targets.

The aftermath of those tests is just one contributor to the much larger problem of space debris, though — NASA is currently tracking more than 23,000 pieces of junk larger than a softball, and it estimates there are half a million pieces larger than a marble orbiting our planet.

As access to space becomes cheaper, the number of satellites around Earth is expected to increase dramatically. Any that stop working will become new objects to track, until they fall out of orbit. If they crash into each other, they could break into smaller pieces of junk that are still dangerous, but harder to keep an eye on.

Cleaning up space: Thankfully, the problem of space debris is already on the radars of many scientists and startups, who are coming up with promising solutions.

Proposals for removing existing space junk — some of which have already been demonstrated in space — include nets, harpoons, robotic arms, and more.

There are also ideas for repurposing the junk. Space services company Nanoracks wants to use it to build tomorrow’s space stations, and South African startup Hypernova Space Technologies is developing a propulsion system that would allow satellites to use space debris as fuel.

The best way to address the issue of space junk, though, may be to stop creating it in the first place, according to Holger Krag, head of the ESA’s Space Debris Office.

“We will see, hopefully, in the future tighter national guidelines and space laws that mandate a ‘zero debris’ policy,” he told Space News. “That means that an object that is not removed by [its] own means will have to be removed by using [active debris removal] services.” 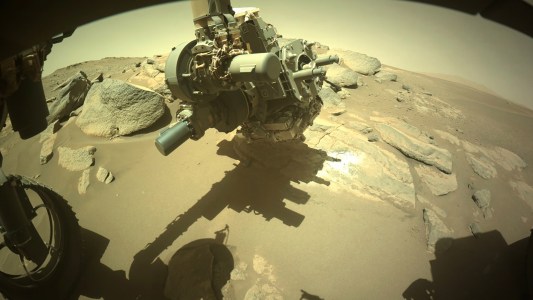 NASA’s Perseverance rover is on the hunt for its next samples from Mars, scraping away a small circle of rock to see beneath its surface.