The internet is constantly evolving — today’s version is far different from the slow, text-dominated one we all thought was da bomb back in the 1990s, and tomorrow’s internet will be its own beast.

If you’ve been following any predictions for how that internet of tomorrow will look and function, you’ve likely heard people throwing around the terms “Web 3.0” and “the metaverse,” but they aren’t the same thing.

Here’s how Web 3.0 and the metaverse differ and what they each mean for your future on the internet.

Web 3.0 centers on the idea that there was already a major shift in how we use the internet, moving us from Web 1.0 (yesterday’s internet) to Web 2.0 (today’s internet), so it helps to define those generations.

Web 2.0 has come to define the version of the internet that followed: one dominated by user-created content. This is when we all started to interact via social media posts on Facebook, create and share videos on YouTube, and leave comments, well, everywhere.

People have been speculating about what Web 3.0 would look like since at least 2006. The version making waves right now, though, was predicted in 2014 by Gavin Wood, co-creator of the Ethereum blockchain, who expected the internet of the future to be centered on — unsurprisingly — blockchain technology.

If “blockchain” is another term that you’ve heard but not quite understood, the core idea of the tech is that data is decentralized — instead of being stored on central servers owned by one entity, an entire network of computers owned by individuals each has a copy of the information.

When we look at this in the context of money — specifically, cryptocurrency, the most common blockchain application — it’s the difference between a bank keeping track of your account activity on its own server and a network of computers keeping track of it on a shared ledger.

Financial transactions are just one application for blockchain networks, though — they can serve as distributed storage for any kind of data, and if Web 3.0 plays out the way proponents envision, they’ll serve as the backbone of the future internet.

NFTs and decentralized web browsers could be early signs of Web 3.0.

What this means in practical terms is that, instead of spending all our time on websites (Facebook, Google, etc.) that own and monetize the content and data we create, we’ll use social networks, search engines, and other apps that use blockchains to let us control that data.

These include non-fungible tokens (NFTs), which use blockchain tech to help artists monetize and distribute their digital creations in new ways, and decentralized web browsers, which block ads and let users choose which websites can access their browsing data.

So, what is the metaverse?

While Web 3.0 is mainly about who will own and control tomorrow’s internet, the metaverse centers on how users will experience the internet of the future.

Currently, most of us navigate websites and apps through the screens of computers, smartphones, and tablets. Metaverse proponents say we’ll use virtual reality (VR) tech to enter the internet tomorrow, moving between virtual worlds in the form of digital avatars.

Each of these virtual worlds is a metaverse, and you can already explore several online, including Rec Room, Fortnite, Decentraland, and Horizon Worlds, a kind of virtual game world created by Meta (the parent company of Facebook).

While most of today’s metaverses are gaming platforms populated by pre-teens, if the concept takes off the way supporters think it will, it could transform the way we all work, socialize, and more online.

Instead of talking to your coworkers through a video conferencing service, such as Zoom, for example, you might don a VR headset and engage with their avatars in a virtual space.

And rather than chat with friends through text or Facebook Messenger, your crew might agree to meet up in the crowd of a virtual music festival where real-life musicians perform as digital avatars.

How do Web 3.0 and the metaverse connect?

While the metaverse and Web 3.0 aren’t the same thing, they also aren’t competing versions of the future internet — one, both, or neither of them could come to fruition, and there could be some overlap between the two.

A digital artist might create an outfit for an avatar to wear in the metaverse, for example, and then make money by auctioning it off along with an NFT. This would give the buyer exclusive ownership of the outfit — even if other people copied it, their avatars would technically be wearing knock-offs.

The metaverse could transform the way we work, socialize, and more online.

There’s also the possibility that we end up with a Web 3.0 that we experience just like today’s internet, through computers and smartphones rather than VR headsets.

That’s particularly likely if the tech industry isn’t able to overcome current hardware limitations — Intel recently predicted that computers will need to be 1,000 times more efficient to support the metaverse, and we’re still waiting for someone to release a comfortable, affordable VR headset.

Facebook — the kind of centralized company Web 3.0 aims to hobble — literally changed its name to “Meta” to signal its intention to build and monetize the metaverse. But then there are metaverses like Decentraland, where everything is built and owned by users.

The assets for sale in the metaverse might be created by digital artists for whom the new internet experience offers a way to finally make some profit — or massive corporations, such as Nike and Gucci, who view the metaverse as simply one more revenue stream.

While we’re now catching glimpses of both Web 3.0 and the metaverse, neither is close to upending today’s screen-based internet, populated by competing (but centralized) corporations. And some say they never will.

Twitter founder Jack Dorsey has argued that a more decentralized internet won’t necessarily increase users’ power the way Web 3.0 proponents predict — it’ll just take that power away from Big Tech and put it in the hands of the venture capitalists investing in blockchain apps.

“[Web 3.0] will never escape their incentives,” he tweeted in December 2021. “It’s ultimately a centralized entity with a different label.”

Tomorrow’s internet will most likely be a lot like today’s, but with new elements from Web 3.0 and the metaverse.

Even if we can overcome the technological hurdles to creating the metaverse, people might simply prefer to experience their internet the way they do today — as Elon Musk, CEO of Tesla and SpaceX, bluntly put it in an interview with the Babylon Bee, ​​“I don’t see someone strapping a friggin’ screen to their face all day.”

What seems to be the most likely scenario is that tomorrow’s internet will be a lot like today’s centralized, screen-based internet along with new elements from Web 3.0 and the metaverse — and now that you know what those terms mean, you can go forth knowing what to expect.

Blockchain
Inside the crypto black markets of Argentina
Argentina’s black market for cash is embracing crypto — but it’s not what crypto proponents expected.
Up Next 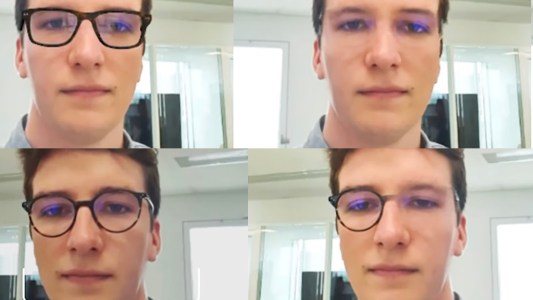 Fittingbox’s Frame Removal uses diminished reality to help people pick out new eyeglasses — but the tech’s potential extends far beyond the bridge of your nose.