The first trial, in California, began last summer, with a Bronx-based trial beginning this past January. Both are investigating MDMA therapy for PTSD.

Three trials, two in San Diego and one in Portland, are scheduled to begin later this year,  Londoño reports, testing MDMA and synthetic psilocybin, a lab-made version of the magic in magic mushrooms.

“The VA is an ideal system for testing these therapies because often research protocols are well integrated into the clinic, therapists can maintain surveillance of patients before, during and after the therapy and customize and integrate needs with other mental health and primary care treatments,” Rachel Yehuda, the director of mental health at the Bronx’s Veterans Affairs Medical Center, who is running the New York study, tells Freethink.

The about-face on psychedelic research comes amid a research renaissance in the field, as both the scientific and social conception of the drugs has shifted in the past decade.

August institutions like Johns Hopkins and the Icahn School of Medicine at Mount Sinai now have dedicated psychedelic research centers. Yehuda, a pioneer in trauma research, is also director of Icahn’s Center for Psychedelic Psychotherapy and Trauma Research, which has a special focus on PTSD.

And voters in Oregon became the first in the nation to decriminalize possession of psychedelics and establish a framework for their therapeutic use. Connecticut and Texas have also approved research into the drugs.

As Londoño points out, the VA and other government agencies were once on the leading edge of psychedelic research — including the inhumane and notorious MKUltra experiments and a 1963 Kansas VA study on using LSD to treat alcoholism.

Psychedelics and PTSD: A growing body of evidence has found that psychedelics, in combination with psychotherapy, may be effective treatments for some forms of mental health disorders.

MDMA has looked particularly effective for treating PTSD, being deemed a “breakthrough therapy” for the condition in 2017 by the FDA. The thinking is that the psychoactive qualities of the drug on mood may be behind MDMA therapy’s apparent efficacy.

“PTSD is difficult to treat because patients often avoid talking about the trauma because it is very distressing, and they develop a lot of behaviors that are harmful to them,” Yehuda says.

MDMA seems able to put patients in the right frame of mind to discuss these traumas without becoming too emotionally distressed.

The psychedelic is not a “magic pill,” Yehuda told Londoño, but instead allows patients to enter the right frame of mind to “emotionally engage, where you can process the memory but not get so distressed by the memory that you become emotionally numb.”

A growing body of evidence has found that psychedelics, in combination with psychotherapy, may be effective treatments for some forms of mental health disorders, including PTSD.

The trials: Yehuda’s trial looks to compare the efficacy of two sessions of MDMA-assisted therapy versus three in veterans with PTSD treated in an outpatient clinic setting.

A study run by psychiatrist Shannon T. Remick in Loma Linda, California, will treat 10 veterans with three MDMA and psychotherapy sessions, tracking the results for at least a year.

To the southwest, in San Diego, clinical psychologist Leslie Morland is investigating the use of MDMA-assisted therapy for couples who are impacted by PTSD.

“PTSD also takes its toll on marital and family relationships, and the general instinct to run away from talking about what happens can keep patients in a vortex where they wish to get better, but can only get so much better because the therapy itself might contribute to their distress,” Yehuda tells Freethink.

The challenges: There are issues with performing psychedelic studies, including the difficulty of a placebo control — the drugs tend to have very strong effects, so patients know if they got the treatment.

There are workarounds, however, including using other drugs in the control group, like stimulants, or comparing different doses. Additionally, the studies will be quite small, which makes interpreting efficacy difficult. Researchers told Londoño they soon expect more and larger trials to build on this work.

Such trials will be important if psychedelic-assisted therapy is to become widely accepted clinically. Figuring out the appropriate patient populations for such treatments — and not becoming too enamored by the admittedly promising results thus far — will be necessary to ensure safety and that any results are not due simply to a “halo” effect.

“Popular media is inundated with overwhelmingly positive references to these drugs, which can potentially influence patients’ and therapists’ expectations,” Londoño reported senior FDA official Javier Muniz saying, noting that the enthusiasm for the drugs is very high.

“We hope that the use of psychedelics might assist the therapeutic process by helping veteran process traumatic memories in a more productive manner, and be able to make the kind of insights that will give them a different view of themselves – such as what happened was not their fault, that their lives are still worth living – and this will lead to symptom reduction and hopefully also deep healing and posttraumatic growth,” Yehuda tells Freethink. 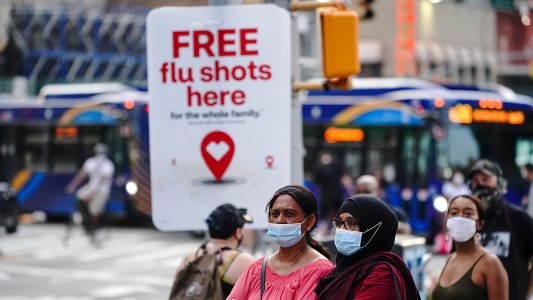 NIAID researchers have begun a phase 1 trial of a new universal vaccine candidate that was promising in animal challenge studies.