Baylor College of Medicine researchers have developed what they call a “mood decoder” during a small clinical trial of deep brain stimulation as a therapy for treatment-resistant depression.

Using brain recordings from within the skull, the researchers were able to divine how activity in certain regions of the brain matched up with moods, with the hope of being able to objectively measure the severity of depression symptoms, as well as identify the best places to stimulate for therapy.

Although limited to only three patients, the results thus far have shown promise, BCM neurosurgeon and trial lead Sameer Sheth told MIT Technology Review’s Jessica Hamzelou. The team was able to identify mood based on specific brain activity — and found a way to stimulate a positive mood.

“This is the first demonstration of successful and consistent mood decoding of humans in these brain regions,” Sheth told Hamzelou.

Researchers have developed what they call a “mood decoder” during a small clinical trial of deep brain stimulation as a therapy for treatment-resistant depression.

Knowing the enemy: Major depressive disorder “has immense social and economic consequences,” the authors note in their study, available as a preprint and presented at last November’s Society for Neuroscience annual meeting.

Nearly a third of patients are treatment-resistant, meaning that the typical frontline medications do not work for them. Researchers are continually searching for other treatments — including psychedelics like psilocybin and ketamine, as well as non-pharmaceutical interventions like deep brain stimulation and even electroconvulsive therapy — but they often run up against the greatest barrier to the brain: a lack of corporeal understanding.

“One critical knowledge gap fueling the challenge of treating treatment-resistant depression (TRD) is an insufficient understanding of its neurophysiological basis,” the authors wrote.

Simply put: we don’t know how depression works in the brain, like we would, say, a tumor or prion disease. We can’t see it or measure it, outside of how patients describe their experience.

There’s an entire field of science — computational psychiatry — dedicated to figuring this out; to putting, essentially, objective data on feelings. And while some teams are looking inside the brain for insights into neurotransmitters, many efforts are noninvasive, relying on tools like EEG, fMRI, and OPM. All of these devices use sensors to take measurements of things going on in the brain from outside of it.

As such, they still lack precise, physical information.

“This understanding, drilled down to the level of the individual, will be essential for treatment-resistant patients being considered for invasive neuromodulation such as deep brain stimulation,” the authors wrote.

But intracranial measurements — commonly used for monitoring seizures — can provide that information.

Decoding mood, delivering DBS: “John” was one of the patients in the trial. To help develop a deep brain stimulation (DBS) therapy, where precise shocks to specific regions of the brain could help relieve his depression, the team used their “mood decoder” to guide the treatment, Hamzelou reported.

When the monitoring period was over, the team removed the 10 monitoring electrodes, leaving in four for John’s DBS treatment, which consisted of targeted electric pulses to precise areas of his brain. The depression treatment has “saved his life,” he told Hamzelou.

Two other patients also had their brain measurements analyzed. Data in hand, the team was able to determine how certain brain activity correlated with mood and depression symptoms, across a “substantial variation in depression severity,” the authors wrote in their preprint.

The decoder was very good at predicting patients’ actual mood based on their measured brain activity, both within each patient and when their data was combined.

While the reasons behind this are not clear — as is common when dealing with the brain — it could be based in part on how the DBS is being delivered.

“We don’t know how to deliver DBS intelligently to any given individual,” Sheth told Hamzelou. “This is just a very immature therapy.”

The mood decoder might allow for better designed DBS.

There’s a couple important caveats to the research, however. One is its size; only three patients’ information has been analyzed. The other is with the mood decoder itself. As it is, it would not be a practical way to screen millions of depression sufferers, since it is invasive, costly, and carries risk.

Instead, Sheth told Hamzelou, the team is hoping for generalizable insights that could potentially be applied more broadly, potentially with less invasive brain measuring tools. 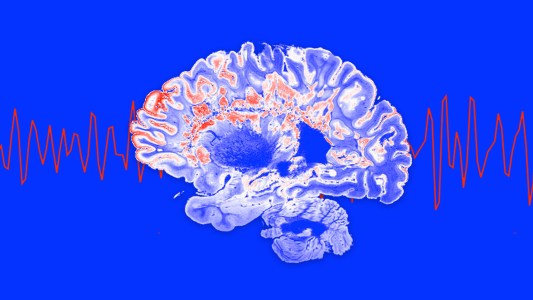 Neuroscience
MIT is testing light and sound to combat Alzheimer’s
By Kristin Houser
Subscribe to Freethink for more great stories
Subscription Center
Sections
Video
Freethink
Subscribe
We focus on solutions: the smartest people, the biggest ideas, and the most ground breaking technology shaping our future.
Subscribe