2022 was a big year for missions to space — NASA finally got its massive new moon rocket off the ground, the James Webb Space Telescope delivered its first science images, and the world’s first planetary defense mission successfully slammed into an asteroid.

The next year is expected to be just as groundbreaking, so as 2023 approaches, let’s take a look at 12 exciting space stories to look forward to over the next 12 months.

Deep below Earth’s rocky crust and viscous mantle lies a core made of metal. Because we can’t actually reach that core, we don’t know much about it, leaving a gap in our understanding of how terrestrial planets like ours form.

The Psyche mission might fill that gap. Set to launch in October 2023, the NASA orbiter will travel about 186 million miles to the metal-rich asteroid Psyche, which astronomers suspect may be the exposed core of an early planet — giving us our first direct look at what may lie beneath Earth’s rocky surface.

The return of OSIRIS-REx

While Psyche is set to launch in 2023, another asteroid mission, OSIRIS-REx, is expected to return home this year — after touching down on the surface of the asteroid Bennu in 2020 to collect the US’s first asteroid sample.

The bits of space rock are now en route to Earth, with an expected delivery in September 2023. The hope is that scientists will be able to use the sample to improve the accuracy of remote asteroid observations — in case we need to try to divert a threatening space rock in the future.

Continuing the theme of space defense is the VICTUS NOX mission, but rather than protecting Earth from an asteroid, this initiative is designed to protect the US from any enemies who decide to wage an off-world war by destroying one of our valuable satellites.

The mission is a test: at some point in 2023, Space Safari (a part of the US Space Force) will tell Firefly Aerospace that it needs to launch a satellite. The launch service provider will then have just 24 hours to get it into orbit — demonstrating the US’s ability to rapidly replace a downed satellite.

Firefly isn’t the only newcomer to the aerospace industry with a lot to look forward to in 2023. LA-based startup Relativity Space expects to launch Terran 1 — the world’s first 3D-printed rocket — for the first time this year, with a launch window opening on January 31.

A successful maiden flight for Terran 1 will clear the way for development of a larger rocket, Terran R, which Relativity hopes to use to deliver the first commercial payload to Mars as soon as 2024.

Another newbie on the space scene, Australia’s Gilmour Space Technologies, plans to launch its first rocket, Eris, in April 2023. If successful, it will make Australia just the 12th nation to reach space using a rocket built in-country.

A successful launch will also make Eris the first rocket to fly under the power of a hybrid engine — one in which the fuel and oxidizer are different states of matter — which could potentially open the door to safer, cheaper spaceflights.

The launch of Starship

Several large aerospace companies also have first-of-their-kind launches planned for 2023, with perhaps none more anticipated than SpaceX’s Starship, which is poised to surpass NASA’s SLS as the biggest rocket to ever fly.

In November and December 2022, SpaceX conducted several static fire tests of the massive rocket’s engines, and while Elon Musk’s company hasn’t set a date for Starship’s first-ever orbital test flight, experts predict it’ll happen in the first half of 2023.

Musk’s billionaire rival, Jeff Bezos, has his own aerospace company, Blue Origin, but unlike SpaceX, it’s only flown a rocket capable of suborbital flight (New Shephard). The company hopes to change that in late 2023, with the maiden flight of its first orbital rocket: New Glenn.

Development on the heavy-lift rocket began a decade ago, and its first launch has already been delayed three times, but if New Glenn does fly in 2023, Blue Origin will be able to start competing with SpaceX and United Launch Alliance (ULA) for NASA contracts.

Speaking of ULA, since forming in 2006, the company — a joint venture between aerospace giants Lockheed Martin and Boeing — has launched more than 150 of its Atlas and Delta rockets for NASA, the US Department of Defense, and other customers.

The company expects to launch its next-generation rocket — Vulcan Centaur — for the first time in early 2023, and its maiden flight will send a lander developed by Pittsburgh’s Astrobotic Technologies to the moon.

Depending on the timing of Vulcan Centaur launch, Astrobotics’ Peregrine could be the first private lunar lander to reach the moon’s surface. (Nova-C, a lunar lander built by Houston’s Intuitive Machines, could also take the prize — it’s expected to launch in March 2023.)

One private lander has a head start on the competition, though: Japanese startup ispace’s HAKUTO-R. It launched aboard a SpaceX rocket on December 11, but won’t reach the moon until April 2023 thanks to a circuitous path that takes advantage of the gravity of the Earth and sun to cut fuel costs.

If all goes well with ispace’s mission, Japan will join the short list of nations to successfully soft land on the moon. India is also hoping to add itself to that list in 2023 with the June launch of its Chandrayaan-3 lunar lander.

This mission will be India’s second attempt at a moon landing — the first attempt,  Chandrayaan-2, ended with the spacecraft crash landing on the moon in 2019, but the nation’s space agency is hopeful that updated engineering will cause this mission to end in success.

The European Space Agency (ESA) also has a moon mission planned for 2023, but this one is targeting not one but three moons — Ganymede, Callisto, and Europa, the ocean-bearing satellites of Jupiter.

Set for launch in April 2023, ESA’s Jupiter Icy Moons Explorer (JUICE) will use a suite of 10 instruments to study the moons over the course of 35 flybys. The hope is that the mission will better our understanding of how — and where — life might exist in the universe.

If everything goes according to plan, 2023 will wrap up the same way 2021 did: with the launch of a brand new space telescope. But unlike NASA’s Webb — which is optimized for infrared wavelengths — China’s Xuntian telescope will observe visible and near-ultraviolet light.

That makes the new telescope something of a successor to the dying Hubble — but with a field of view 350 times greater than Hubble’s, Xuntian will be able to survey 40% of the sky in a decade, compared to the aging Hubble’s less than 0.8% in 32 years. 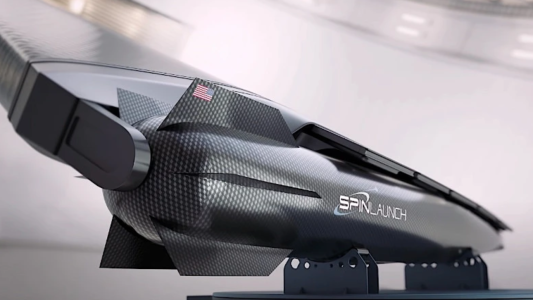 SpinLaunch has a working prototype successfully launching objects at 1,000 miles-per-hour, but will the laws of physics stand in the way?

Physics
Will physics prevent SpinLaunch from succeeding?
By Ethan Siegel
Subscribe to Freethink for more great stories
Subscription Center
Sections
Video
Freethink
Subscribe
We focus on solutions: the smartest people, the biggest ideas, and the most ground breaking technology shaping our future.
Subscribe